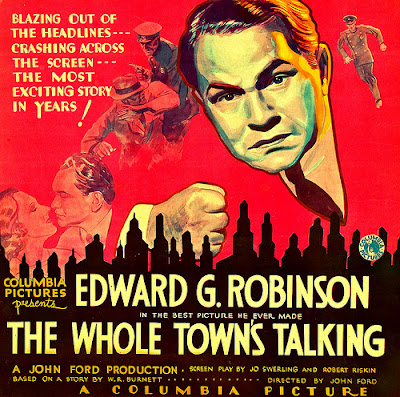 You wouldn’t know it to look at it, but The Whole Town’s Talking is the closest thing director John Ford ever came to making a screwball comedy. It doesn’t have the bourgeois veneer of those venerable Great Depression romantic comedies, and neither does it center on a love story. But that casting of Jean Arthur is a dead giveaway, as is the (for Ford, at least) uncharacteristically machine-gun, all-caps dialogue delivery.

Take a closer look at the plot and you’ll soon realize it has more Hawks and Capra in its DNA than one might think. Screwball comedies tended to involve battles of the sexes where the male’s masculinity was challenged. And while the central conflict in this film isn’t between a man and a woman, it is about a man confronted with his own bifurcated masculinity. Edward G. Robinson plays the dual role of Arthur Jones, a nebbish, wimpy advertising agent and his doppelgänger, notorious bank robber “Killer” Mannion. After Mannion escapes from prison, Jones gets mistaken for him and arrested, setting off a madcap series of events that forces him into a direct confrontation with his criminal counterpart. Mannion bullies Jones into a game of rotating identities, using his ID during the night to throw off police suspicion while orchestrating heists. An increasingly frantic Jones struggles to defeat Mannion at his own game by alerting authorities to his whereabouts without getting mistaken for him again…or tipping him off.

Much of the joy in The Whole Town’s Talking comes from Robinson’s dual performance which demonstrates comedic chops he rarely got to use because of his typecasting as a tough guy. Jones is everything Mannion—the traditional Robinson heavy—isn’t: nervous, cowardly, prone to fainting in stressful situations. The man writes sappy love poetry that he sends anonymously to his office crush, for heaven’s sake! He is, simply, the emasculated male forced to compete with his reverse image. Rounding everything out is Arthur as Wilhelmina, Jones’ office crush. A smirking, tough-as-nails dynamo, she spends the film egging Jones on to greater acts of traditional masculinity, even complimenting him after he brazenly kisses her after getting drunk with their boss (don’t ask; long story). By usurping Mannion, Jones completes himself as a full, complete man and is rewarded with Wilhelmina’s hand. It’s a typical screwball restoration of gender equilibrium for a screwball that was anything but typical.
Posted by Steve Kopian at April 17, 2020