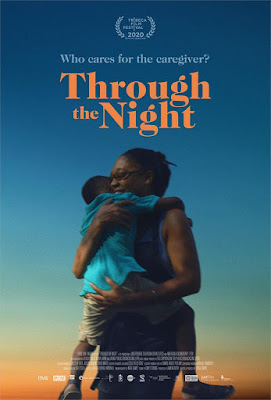 THROUGH THE NIGHT made me go WOW.

The  film is a portrait of Delores "Nunu" Hogan, who along with her husband run a 24 hour day care center in their home in New Rochelle New York.  Because parents are forced to work all hours of the day and night Nunu and her husband takes kids as they are needed. The result is a film that shines a light on what it takes to keep parents able to earn a living to provide for their families.

The film also focuses on two families who use Nunu's services. They would prefer not to be schlepping their kids to day care in the middle of the night, but it is the only way to make money. As one mother says during a rushed lunch break, one of her bosses can't understand why she works multiple jobs. They feel she should be able to work a single job and support their kids. The same boss won't help this mother work a single job because they intentionally keep her hours under the legal minimum to get health insurance. Clearly the game is rigged against these parents.

Largely observational the film allows scenes to play out  naturally. We are there as the kids come and go, wake up or head to bed. Director Loira Limbal has earned the trust of everyone so the film is peppered with the films subjects just talking an opening up. We have the above mentioned  mother talking about her boss problems, a young girl who explains how Nunu's love made her less shy and open to people, and of course there is Nunu herself who talks of the struggle she faces every day, even to just get out of bed.

Limbal's crafting is so magnificent in arranging the tale so we truly understand that I am hard pressed to believe that this is her first film. The mind boggles at what she will do next. Put her on the list of directors to watch.

THROUGH THE NIGHT is a vital and important film about the state of the world. It is highly recommended. 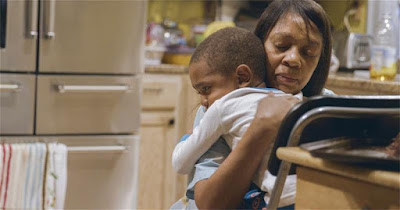