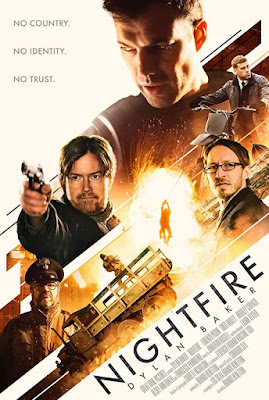 Opening with the US offering aid to Ukraine and essentially buying it for a cash donation of 2 billion dollars (not bloody likely) the film then shifts to two CIA men gathering two computer circuits hidden in the arm of a dead agent. As they try to flee they end up taking a political prisoner along with them. Things don't go smoothly.

This short very feature (it's 43 minutes long making it a feature according to many organizations definition) moves like the wind before getting off. There isn't an ounce of filler anywhere in this baby and we are so much better for it.

Shot as a student thesis it looks more polished than most bigger budget action films we are seeing these days. Its so good in fact that it could work as a pilot for a killer TV series though I doubt highly that any show could have as many chases and gun fights as this on a weekly basis.

That the film works as well as it does is due to a cast willing to sell what is going on on screen as well as the completely lack of CGI. Everything is practical effects or actual locations which means we believe more easily.

How good is this film? I initially was hesitant to see the film but decided to do so because Covid19 wrecked the release schedules. However now that the film is out I'm emailing friends telling them to watch it. You do so too.

NIGHT FIRE hits streaming platforms, including Hulu and Amazon, May 1 via Hewes Pictures
Posted by Steve Kopian at April 29, 2020