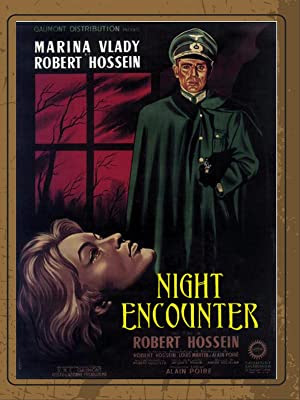 Plans for the British coastal defenses are stolen by the Nazis they send a female agent France to pass them to the Germans. The British try to capture her and the ring. The capture everyone but the girl. Desperate to make sure the plans don't get into the wrong hands the British try to locate her- but at the same time prepare to send their own female agent to France. They also try to kill the German soldier she is to meet and replace him with one of their own.  The hope is that one or both of the people arriving at the meeting will be British agents-but since time is of the essence there is no way to be certain which agents will be meeting in the small cabin... Thus as the two agents arrive we don't know who is who...

Good small scale spy drama is essentially a two-hander as the the to agents dance around each other for most of the running time. I will not go into details as to what happens other than to say it makes for compelling viewing. What happens is taut because until the final fade out you really aren't sure what is going on.

If I have to nitpick anything it is going to be simply that this probably would have been better as a stage play. I say this not because there is anything wrong with the film, rather because it would have kept everything focused on the meeting. The long set up, as good as it is, kind of works against the film because there kind of is no reason we shouldn't know more than we do- I mean we are in England to start- why not tell us more. That's a minor quibble and this is a nifty thriller worth your time.

The film is available streaming on Amazon
Posted by Steve Kopian at April 16, 2020