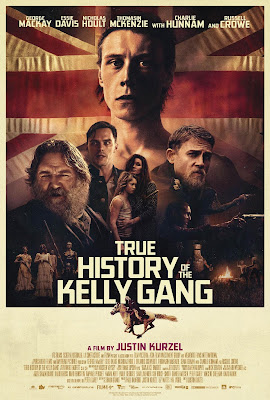 Justin Kurzel takes Peter Carey's novel on the life and times of Ned Kelly, combines it with the true facts (by some reports this is more truth than fiction) to make a haunting look at a robber, hero and rogue best known for wearing a suit of armor in his final shootout.

While dealing with the events in Kelly's life the film takes pains to show us what made him the man we was. We watch as his father was tight lipped and surly, hi mother did what she had to keep the family whole,  and how the world and the people in it taught him the true value or valuelessness of life.

This is a stark gritty ugly film. Spectacular images frame dome unpleasant goings on. This is not the adventures Ned Kelly ala Heath Ledger or Mick Jagger but something closer to reality. Everything is dirty. The nights are dark and death is slow painful and bloody. It is a film that will make you wince.

The cast is first rate. Everyone sells what is going on, though if you are hoping for the big names like Russell Crowe or Charlie Hunnam to have a lot of screen time you'll be disappointed since they disappear early.

Whether you like this film or not is going to be determined by how you take to the pacing/focus of the film. Slow and deliberate and focused wholly on the character of Ned Kelly and not so much on the adventures- at least as adventures. These are real events spinning out not feel good movie turns of a folklore hero. It is not glamorous and feel good.

I find myself mixed on the film. While I love pretty much everything about the film, I find the slow brooding nature hard to sit through. I got up twice during the film and I didn't stop it.

On it's own terms this is a good film. The question is will you be willing to meet it on those terms.