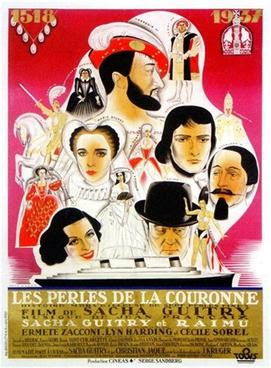 The Pearls of the Crown opens with a whimsical disclaimer: “Researched, written, and often just dreamed up by Sacha Guitry.” From the very beginning, the film wants its audience to know that it’s a fantastical flight of fancy, burdened not by the weight of authentic history but leavened with the playfulness of one of French cinema’s greatest boulevardiers.

Spanning five centuries, three languages, and two continents, the film purports to trace the history of seven valuable pearls, four adorning the English Crown, three lost to the sands of time. In many ways it predicts the later films of Max Ophüls, not just in their opulent recreation of a bygone historical Europe but in their narratives being tethered to objects and circumstances instead of people—think of the earrings being passed from owner to owner in The Earrings of Madame De… (1953) or the unknowingly interconnected social relationships among the Viennese lovers in La Ronde (1950). Guitry zips through centuries of history with disarming casualness despite his players; though much of the first act centers around Henry VIII (Lyn Harding) it blithely skips over all but two of his wives and treats the English Reformation like an obnoxious bit of side business. Elsewhere Napoleon Bonaparte (Émile Drain) pops his head in long enough to establish his love for Josephine (Jacqueline Delubac) before vanishing, the film ignoring his conquest of Europe. Considering Guitry’s noted patriotism (which he clung to even when he was falsely accused of collaborating with the Nazis during World War Two), such an ellipsis would be like John Ford tracing the office of the American President through the centuries and ignoring the Civil War.

But like Guitry’s other films, The Pearls of the Crown is about the contradictions and cruelties of human behavior despite, not due, to their circumstances: a British fop disinterestedly gambling away his family’s three-hundred year old heirloom in the twentieth century is treated with the same sighing detachment as Pope Clement VII (Ermete Zacconi) ordering the assassination of a faithful but inconvenient underling in the sixteenth.

Yet Guitry never shies away from farce, best demonstrated in a scene where an Italian diplomat seduces an Abyssinian queen (a backwards-talking, blackfaced Arletty) with the aid of three translators who play a game of translate-down-the-lane. Despite it’s gentle misanthropy, The Pearls of the Crown is as bubbly as La Poison (1951) is cynical.
Posted by Steve Kopian at April 19, 2020