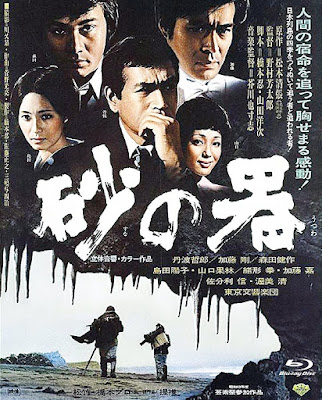 Yoshitarō Nomura’s Castle of Sand is a bait-and-switch for the ages. Nomura spends most of the runtime convincing us the film is one thing before pulling the rug out from beneath us in the third act, revealing that it’s something richer, more nuanced, and infinitely more tragic.

The film is ostensibly a police procedural, albeit a deliberately languid one. After an elderly John Doe shows up bludgeoned to death in a Tokyo rail yard, two police detectives set off on a cross-country investigation to discover his identity and his killer. Their only two leads come from a bartender who happened to see the deceased talking to someone shortly before his death: he had a conspicuous Tōhoku accent (from the northeast of Japan’s main island) and he kept repeating the word “Kameda” over and over again.

The first hour and a half follows the detectives’ meticulous legwork chasing leads, interviewing witnesses, and consulting experts. Whereas most police procedurals aim for nervy tension and forward momentum, these sequences have the feel of a drowsy Japanese summer where the drone of cicadas and the hum of electric fans lull the hot and tired to sleep. Despite going through the motions of unraveling a detective mystery, Nomura is primarily interested in replicating the psychic and emotional geography of his locations, making us experience the sweaty heat and stultifying placidness of the remote villages and small towns involved in the investigation. When the killer is finally revealed with an hour of runtime left, the purpose of Nomura’s methods click into place as the investigators gather and announce their findings like they’re detectives fingering the killer in a crowded drawing room in an Agatha Christie novel. Their explanation takes up the remaining hour, and it’s intercut with scenes of the killer’s childhood during World War Two when they were forced to flee from their village and live on the road after their father contracted leprosy. These flashbacks are silent and set to sweeping orchestral music reminiscent of Ryuichi Sakamoto at his most mournful.

If the first two acts of Castle of Sand had played like a traditional narrative-first police procedural, these scenes are so tragic and over-the-top they could have veered into the realm of camp. But by making the film first and foremost a mood piece about places and people, this last hour is inoculated against such petty cynicism.
Posted by Steve Kopian at April 18, 2020