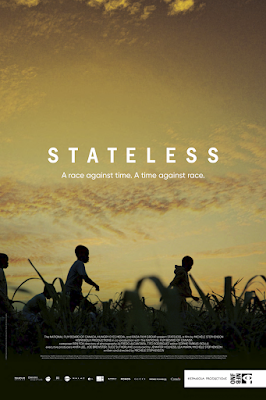 This is the story of the ethnically Haitian citizens of the Dominican Republic. In 2013 retroactively revoked their citizenship backdated  to 1929. In order to sort everyone out the government decided to issue new identity cards, requiring a mountain of documentation.  As a result of this 200,000 Dominican's with roots in Haiti may end up stateless.

The film follows three people:
Activist - Rosa Iris Diendomi-Alvarez who is fighting to make sure everyone is documented.
A nationalist-Gladys Feliz who sees all Haitians as monsters who must be removed.
A respected business man Teofilo Murat who is caught in the middle.
Through their stories we see how the country is potentially going to tear itself apart

As bracing as the film can be, the  film lags at times. While the film  gives us the whole story there are several points were we see similar events play out over and over again. Conversations seem to repeat. While this is undoubtedly what happened, seeing them repeated within a short time makes it hard to remain engaged. I like the film but I wish it was a bit shorter.

Reservations aside this is worth seeing because this is an intriguing story. It is one that echoes the divides within America where nationalists want to keep any one who doesn't look like them out.  Seeing America's woes through a different lens is enlightening. It is a warning to anyone what may happen if stupidity isn't kept in check.
Posted by Steve Kopian at April 25, 2020