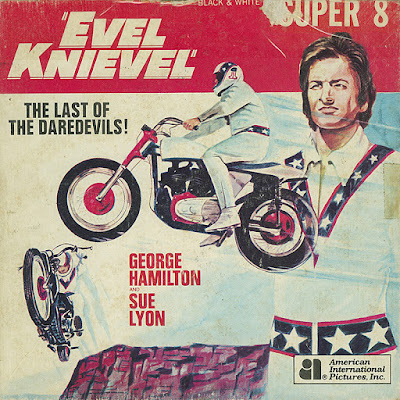 It always seemed like John Milius had a screw loose. Whether it was his idolization of the military, his proto-fascist heroes, or his uncomfortably fetishistic obsession with Japanese culture, Milius always seemed to move to a defiantly different drumbeat than the rest of the world. But no one thing screams this more than the revelation that of all the films he’d written his favorite was Marvin J. Chomsky’s Evel Knievel (1971). Not the early Dirty Harry movies, not Jeremiah Johnson (1972), not even the seminal Apocalypse Now (1979)—it was this cheaply made biopic of the infamous stunt performer. And if you watch only the first five minutes, you might understand and possibly even agree.

The opening scene sees Knievel (George Hamilton) escorted through an empty Ontario Motor Speedway with a motorcycle honor guard like he was a cross between a Roman Emperor and a Hells Angels foot-soldier. He pulls up to his bike, faces the camera, and addresses the audience with the most over-the-top rah-rah monologue since the opening address of Franklin J. Schaffner’s Patton the year before, name-dropping Columbus, the Wright Brothers, and Neil Armstrong as he expounds his can-do personal philosophy. It’s patently, undeniably preposterous. But something about the speech, something about the performance, something about the pomp and bravado of the sequence makes it work, and for a moment we understand why Knievel thought of himself as the “Last Gladiator.”

Then the scene ends and the whole film falls apart with the filmmakers left holding the wheel. Sloppily tumbling through hackneyed slapstick, good ol’ boys shenanigans out of a Dukes of Hazzard episode, uncomfortably grim behind-the-scenes revelations about Knievel’s anxieties and tyrannies as a star, and grainy stock footage of the historical Knievel’s stunts, the film can’t decide what it wants to be and, more importantly, who its hero is. Is he a Saturday morning cartoon hero giving inspirational speeches before performing impossible stunts? Is he a chilled out take-it-as-it-comes antihero, cracking jokes with his friends at the bar before moseying off to raise hell? Is he a smooth ladies man who’ll ride a motorcycle into a girl’s dormitory to pick up his gal for a date? Or is he an actual bank robber and criminal? There’s certainly an interesting character study to be made about this American icon, but this ain’t it.
Posted by Steve Kopian at April 25, 2020