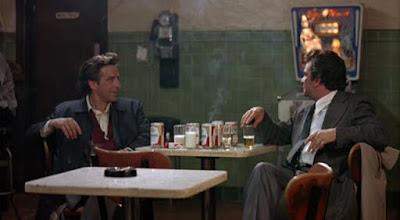 The stories of how Elaine May made her 1976 film Mikey and Nicky are almost as entertaining as the movie itself—not quite, but almost. It’s impossible to stifle a chortle when one reads how May, previously a director of modestly budgeted studio comedies, went practically mad with power making it, shooting a gobsmacking 1.4 million feet of film—nearly three times as much as was used for Gone with the Wind (1939)!!!—by running three cameras simultaneously for each scene. Reportedly, she once chewed out a camera operator who dared stop rolling after her stars Peter Falk and John Cassavetes left the set, explaining that they might return. After she shot enough film to supply a small indie studio for a year, she spent years editing the damn thing, sometimes hiding the negatives from the studio with the help of her psychoanalyst.

All this suggests a creative flying by the seat of their pants, improvising like a speed freak trying to talk their way out of a traffic ticket. But in reality, May’s story of the love-hate-love-despise-love relationship of two Philadelphia gangsters on the last night of their friendship before one of them gets bumped off was carefully scripted. All the seemingly spontaneous dialogue bubbling up from nowhere? The manic fights exploding out of nothing? These were apparently all pre-written and rehearsed. This, then, is the central conflict at work in Mikey and Nicky: it’s a meticulously constructed character study with all the verve and energy of improvisation. How appropriate considering that the film is about misjudged appearances and intentions—of men who are not who they say they are and friends who might’ve been enemies the whole time. The film is a dizzying dissection of mutually self-destructive male egotism, a folie à deux of performative masculine bonding.

Though highly tragic, it’s also inescapably funny. How could it not be?—it’s a thinly veiled breakup movie about two crooks too proud or self-conscious to admit that they love each other. The comic absurdity is inevitable, whether it’s Cassavetes forcing Falk to awkwardly watch him lay a prostitute to prove his manliness or Falk accidentally forgetting the words to the Kaddish while standing over Cassavetes’ mother’s grave. Yet still, the ultimate sway of the film is towards the tragic—and when the credits finally roll we feel nothing but shock, disgust, and despair.
Posted by Steve Kopian at April 23, 2020