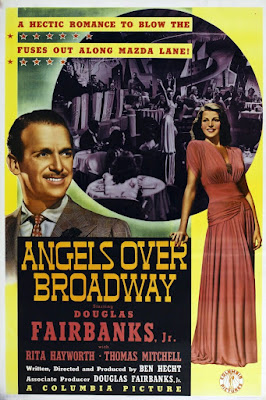 Ben Hecht’s Angels Over Broadway beings with the most stereotypically noirish opening ever. One rainy night in New York City, a small time hood stands under a neon sign, his fedora and trench coat sopping. As he looks out on the street we hear his inner thoughts. “That’s what this town is. A dice game,” he monologues. Staring up at the sky, he pleas “rain me a seven.” Smash cut to a dimly lit office where a nebbish sap pens a suicide note only to be interrupted by his boss. As if Hecht hit a literal exposition dump button, the boss swiftly berates him for embezzling $3,000 for his unfaithful wife and demands he pay it back by the next morning or he’ll turn him in to the police.

Filmed by legendary cinematographer Lee Garmes, there’s a tight, claustrophobic unease to these scenes, signaling the start of a desperate, hard-boiled bit of gristle. But these opening scenes are a trick. Not only is Angels Over Broadway not a noir, it’s practically an anti-noir standing in direct opposition to that genre’s hopelessness and nihilism; it’s a film about the triumph of man’s better angels in the face of despair and adversity. It follows the suicidal embezzler Charles Engle (John Qualen) as he stumbles into the path of the monologuing criminal Bill O’Brien (Douglas Fairbanks Jr.) in the middle of a self-destructive bender in a casino. Mistaking Engle for a rich out-of-towner, he conspires with showgirl Nina Barona (Rita Hayworth) to trick him into a high stakes poker game with a gangster in exchange for a “finder’s fee.” (This was Hayworth’s first leading role in an “A” picture and her starring as a nightclub showgirl was a portent Rita fans will get a kick out of.) But their plans get interrupted when Engle is intercepted by failing playwright Gene Gibbons (Thomas Mitchell) who learns of his plight and conspires to help him actually win the poker game. Eventually O’Brien and Barona come around and help Engle win the $3,000 he needs before fleeing into the night.

In the hands of a lesser filmmaker, the story could’ve easily come off as twee and insincere, but something alchemical happened in Hecht’s hands. My money’s on the combination of Garmes’ moody cinematography and Hecht’s grandiose patter (“Venus was never an epileptic,” a drunken Gibbons rumbles while watching an exotic dancer).
Posted by Steve Kopian at April 21, 2020