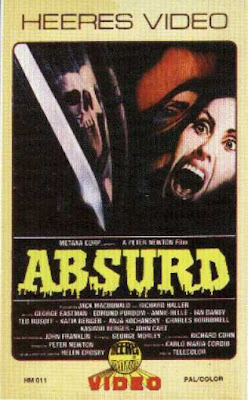 Joe D’Amato’s Absurd is one of those movies where the backstory is infinitely more interesting than the movie itself. Originally conceived as a sequel to D’Amato’s slasher Antropophagus (1980), the script was thrown out and rewritten from scratch as a Halloween (1978) rip-off by actor George Eastman who played the killer in the first film. However, the film was still treated as a spiritual sequel to Antropophagus, being released in some markets as Anthropophagus 2. At least, that’s what it was called when it wasn’t also being sold as Zombie 6: Monster Hunter, the unofficial fourth sequel to Lucio Fulci’s Zombi 2 (1979), itself an unofficial sequel to George A. Romero’s Dawn of the Dead (1978). In other words, Absurd is the unlicensed spin-off to no less than three different movies.

Regardless of what one chooses to call it, the film is nonetheless painfully blasé and boring, not so much borrowing from Halloween as copying its playbook scene by scene. An unstoppable killer escapes from the authorities, arrives in a small American town, stalks a little boy who calls him the boogeyman, and kills all the adults around him until he’s finally killed himself by the boy’s guardian. There’s even a Dr. Loomis surrogate in the form of a Catholic priest responsible for his condition who tries to track him down (weird Vatican medical experiments gave him regenerative powers at the cost of his sanity).

Putting aside the Halloween similarities, the most striking thing about Absurd is its abundance of head and neck violence. All six members of the film’s body count are killed via head and neck trauma: a nurse gets power-drilled through her head, a janitor has his noggin split in half with a table saw, a biker gets strangled, a family friend gets a pickaxe to the brain, a babysitter gets her head fried in the oven then stabbed in the neck with scissors, and the killer eventually gets decapitated. (Spoiler for a nearly thirty year old slasher, I guess.) None of these kill scenes have any tension to them, partially because they’re all obviously telegraphed and because they’re accompanied by an obnoxious two note ostinato on the soundtrack that in no way is reminiscent of John Carpenter’s Halloween theme. (Pinky promise.)

At least Antropophagus demonstrated some creativity with its gore. It was a terrible movie, but nobody will forget the fetus-eating scene.
Posted by Steve Kopian at April 30, 2020