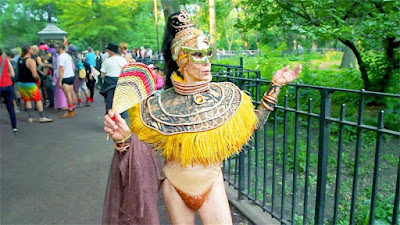 In 2014, in a storage locker in LA, a trove of letter to "Reno Martin" from his friends in New York. The letters opened the door to the drag scene in the city in the years before Stonewall in a way that no one who hadn't lived it could ever know. Taking the letters as a starting point directors Michael Seligman and Jennifer Tiexiera then spent five years trying to find the men who wrote the letters and piecing together the stories told in the letters. The result is a story that will make you smile and cry (sometimes at the same time) as we are allowed to spend time with some wonderful people.

PS BURN THIS is a magnificent film in so many ways.  First and foremost it is full of so many great people you will not only want to go out and track them down so you can talk to them, but more importantly you will regret this isn't able to screen at a physical Tribeca Film Festival. I mean can you imagine what the premiere would have been like? Do you have any idea what post screening Q&As could have been? The mind boggles.

As for the stories I'll just say that the title of the film comes from the story of the theft of wigs from the Metropolitan Opera. The plea was not because it involved being gay, but because it revealed who stole the wigs.

The film is also an opening up of history. It kicks open the door to a part of LGBTQ history that many people were not aware of. It reveals how the drag queens quietly helped to open the doors for gay rights simply by being.

One of the things I like about the film is that it shows us a lot of the good as well as the bad. Since the letters that form the spine are friends dishing to friends we get to see all of life not just one extreme or the other. Everyone is sharing good news, the romances, the balls and  the bad, such the arrests and the time in the psyche ward.  It's all there, told  to us not in cold distant narration, but through the words of a friend and confidant. The letters don't hide anything, nor do the letter writers who fill in details all through the film.

One of the things that is magical is the sense of community. Yes, the letters were all between friends, but you get a sense through the stories of a bigger world. We come to understand how these people found a place - and how the balls like Phil Black's Ball in Harlem gave them a place to be where there was no prejudice, there was only a sense of belonging.

Forgive me if I stumble but I am having trouble finding words to express what I feel about the film- which is a great deal of love.

PS BURN THIS made me cry a couple of times. Watching the men in their 80's and 90's tell it like it was moved me, often when they were moved by their memories. I also cried when we find out what happened to some of the letter writers. I felt so bad losing these friends I had  just made there was nothing else I could do.

But lest you think the film ends on a down beat note- the final fade out is a belly laugh that made me laugh so hard that I hope to meet Daphne one day to thank him.

A must see film. Highly recommended....