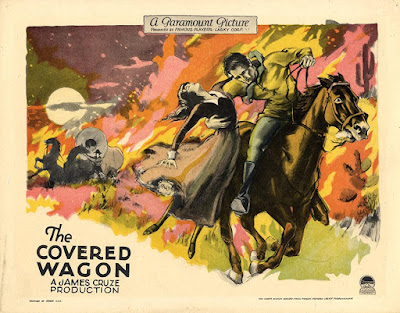 All but forgotten today, James Cruze’s The Covered Wagon was one of the most popular American Westerns of the silent era. Shot largely on location in Utah, Nevada, and California with a massive cast and crew, it told the story of two pioneer wagon trains traveling two thousand miles to Oregon in 1848.

A massive hit, it reportedly nearly doubled the box office take of Cecil B. DeMille’s The Ten Commandments released the same year. In hindsight, it’s easy to see how striking the film must’ve appeared to audiences in the early Twenties. Despite technical limitations there’s a dazzling pictorial grandness to it, particularly in its repeated visual motif of an endless line of covered wagons snaking their way from horizon to foreground. There are moments of intense, almost painful beauty as well, whether it’s a shot of a cow skull emblazoned with a message from Brigham Young and his party of wandering Mormons or a string of covered wagons lining a riverbank like clouds as the settlers bathe and swim in the water. Or consider one nighttime scene where a group of pioneers break into an impromptu Virginia Reel around the campfire, the crowd dancing around and between billowing plumes of opaque smoke. Here the film almost veers into Expressionism, but Cruze doggedly strives for objectivity elsewhere. One prolonged sequence where the settlers carefully cross the “Big Missouri” river smacks of Robert J. Flaherty docudrama (this is not a flippant comparison—the covered wagons were all authentic pioneer wagons rented out from the descendants of their original owners who also appeared as the extras driving them).

But for all its patriotic posturing about the pioneers seeding the West for civilization, the film’s largely suffocated by a tepid romantic triangle between two rival wagon masters and an ingenue. Compare this to John Ford’s The Covered Wagon released the following year: another epic about the Taming of the West, it also featured a prominent romantic subplot. But Ford counterbalanced the romantic melodrama with populist vignettes of railroad immigrant laborers and nearby frontier settlers. Unlike The Covered Wagon where the settlers themselves are largely overlooked as a faceless, homogeneous mass, Ford actually cultivated the sense that we were watching the seeding of a multi-cultural, multi-ethnic nation. Cruze was no Ford, but The Covered Wagon was still fundamental to the evolution of the Western from nickelodeon distractions into legitimate popular art.
Posted by Steve Kopian at April 26, 2020