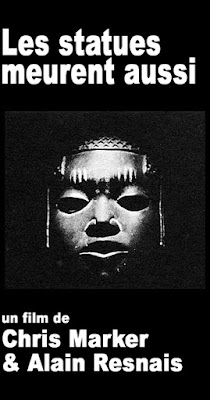 The summer after I graduated high school I spent a few weeks traveling with my aunt, a professor of African art history. Born to missionary parents working in Congo, she never lost her love of the country and its art. That summer she was working on a book about traditional Congolese iconoclasm—literally artwork designed to be destroyed as part of religious rituals or apotropaic magic. Here’s the catch: we didn’t travel to Congo, but to Belgium. Why? Because when Belgium left the country they’d spent years pillaging, they took all its native artwork back with them. So the collective artistic history of untold millennia and peoples wiped out by the slave trade and European colonialism now resides in Belgian museums and storage warehouses.

Watching Alain Resnais, Chris Marker, and Ghislain Cloquet’s documentary short Statues Also Die—a sincere if dated attempt to address the pillaging and destruction of native African artwork at the hands of Westerners—I actually recognized one of the pieces shown in a montage. It was a child-sized humanoid fetish covered in bent nails, and my aunt and I had actually discussed the piece with a museum curator. Was the fetish originally just a wooden sculpture that was later defaced with nails? Or were the nails, all conspicuously bent at exact 90° angles, there by design? We will probably never know, as the piece has been permanently disconnected from the people and society that created it. It was, as Resnais & co. termed in their film, a “dead statue.”

Statues Also Die examines African art’s brutal decontextualization in the West at the hands of museum workers, white art collectors, and vampiric capitalists who transform living embodiments of native art into sterile gallery pieces and reproducible commercial trinkets. (Indeed, one of the film’s flaws is how it ignorantly lumps all African art into a homogenous whole as if the entire continent were inhabited by a single ethnic group.)

The first fifteen minutes are a gorgeous ethnographic exploration of the art’s aesthetics and religious meanings that almost suggests Jean Rouch by way of Jean Vigo. The last fifteen were so controversial in their ruthless criticism of European colonialism—remember, at this time the French still had territorial holdings in Africa—and their insistence that “true” African art can now only be found in the resistance of the black diaspora against white supremacy that it was banned in France.
Posted by Steve Kopian at April 20, 2020