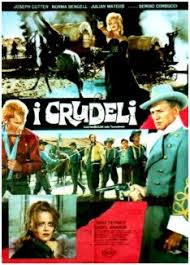 A more appropriate title for Sergio Corbucci’s The Hellbenders would be a direct translation of its original Italian name I crudeli: “The Cruel Ones.” The American title makes sense in its own way, I suppose, as “The Hellbenders” is the name of the protagonists, a family gang of post-Civil War Confederates who massacre a Union convoy and steal a shipment of banknotes to finance a second Southern revolt. But there’s something about the directness of “The Cruel Ones” that better captures the spirit of this spectacularly nasty Spaghetti Western. Murder, rape, torture…these and more sundry atrocities populate the runtime. If it ends with the gang all defeated or dead, it’s not a concession to traditional morality, but merely the proper thematic outcome for a film about doomed, desperate men.

At the film’s core is Colonel Jonas, the leader of the Confederate family too crazy to realize his scheme is destined to fail. How could they possibly muster the manpower and firepower to defeat the Union army occupying the literal burnt remains of the Confederacy? But a brilliant Joseph Cotten plays Colonel Jonas as a man with his cards held close to his chest. No crazy-eyed hysterics, no explosions of maniacal laughter; here is a man with the calm and poise of a dignified and astute tactician. Insane, yes, but he could easily pass for the opposite, especially among his sons.

The film is a brilliantly executed exercise in tension as Colonel Jonas and his sons struggle to smuggle the money through Union territory while hiding it in a coffin supposedly belonging to a dead Confederate officer. To complete their cover, they need a woman to play the dead man’s widow. After their original actress—a drunk played by María Martín who’s so deliciously hateful and repugnant she casts a shadow over the entire film despite being in it for only twenty minutes—gets killed trying to make off with the stash, they trick a saloon hostess named Claire (Norma Bengell) into helping them. The rest of the film sees her alternatively try to aid and betray the Confederates as best suits the preservation of her own skin.

Some of the plot twists literally had me yelling at my screen. And though ostensibly just a piece of violent Western pulp, Corbucci inadvertently revealed the rot at the heart of Confederate revisionism: they really were that twisted and evil.
Posted by Steve Kopian at April 24, 2020