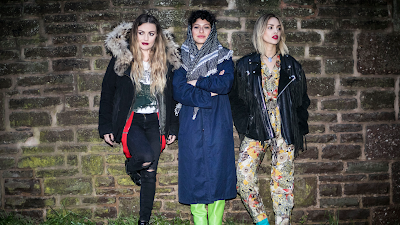 The group Glass Heart has finished the tour for it's first album and now they have have gone to a legendary studio (Queen and Oasis recorded there) for five weeks to record their next album. Unfortunately Kelly, the lead singer and songwriter has frozen and can't write.  Soon emotions flare as they wait for the magic to happen.

Less about the music than the relationships, LOVE SPREADS is a killer little drama that about the dynamics of family. Sure the group maybe be a band but they are ultimately a family and they have their problems and battles that arise out of loving each other a little too much.

The cast (Alia Shawkat, Eliza Gonzalez, Chanel Cresswell, Nick Helm, Dolly Wells, Tara Lee) is top notch across the board and they sell the sense of togetherness. You can feel the ties between them and understand the ripples that run through the relationships.

One of the things I loved about the film is it never really did what I expected. It never went into any of the typically cliche places that a film built around the making of a record goes. Yes, the basic plot of waiting for the songwriter to come up with something is typical for this sort of a film, however how it plays out, the turns the film takes isn't. I didn't expect the path it took to the end and I am delighted. I am also delighted that the film cares more about the characters and than the plot. The plot is merely the excuse to allow the characters to interact and grow or change.

While there isn't a great deal of music in the film, what is here is choice. More importantly where in many similar films you get songs that no one would ever really listen to, I liked what I heard enough that I would like to hear the whole first Glass Heart album and I would like to see how the one we hear being put together turns out.

(And thank you to Danielle Solzman for putting it on my radar)
Posted by Steve Kopian at April 19, 2020