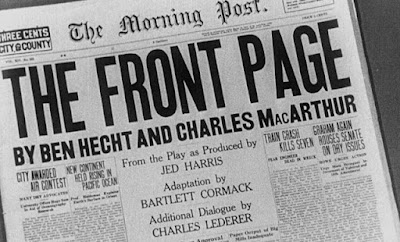 In his seminal auteurist study The American Cinema, critic Andrew Sarris placed Hollywood director Lewis Milestone in the “Less Than Meets the Eye” category of filmmakers, dismissing him thusly: “Milestone is almost the classic example of the uncommitted director…his professionalism is as unyielding as it is meaningless.” This is preposterous, of course, as Milestone was one of the most reliable Hollywood directors of the early sound era, winning two Academy Awards for Best Director in just three years. (Even the notoriously cranky and snooty Jonathan Rosenbaum included his 1933 musical Hallelujah, I’m a Bum in his list of his personal favorite films.) Yet least he lose all credibility, Sarris begrudgingly conceded the brilliance on his 1931 comedy The Front Page, adapted from the Broadway play by Ben Hecht and Charles MacArthur about frenzied Chicago reporters, specifically its “dialectical montage.” This was his diplomatic way of admitting that one couldn’t deny the Russian immigrant’s visual panache.

And while The Front Page certainly has more going for it than mere looks, one can’t discuss the film without acknowledging that its most striking element is Glen MacWilliams’ wildly inventive cinematography. (It’s like how the first thing anyone talks about in Howard Hawks’ classic 1940 remake His Girl Friday is…the talking, specifically the lightning fast repartee between Cary Grant and Rosalind Russell.) Milestone clearly hadn’t shaken all his silent film sensibilities off, as the film demonstrates a kinetic liveliness and pictorial complexity many of its era literally couldn’t match due to the clunky weight and fussiness of early sound equipment. One can’t help but marvel at some of the camerawork like the opening shot of a lightning-fast pull-back from a close-up of a sack of flour tied with a noose to a long shot of the gallows. Or consider a later shot where a harried sheriff passes out papers to a group of reporters. As he circles their table—sheriff in the background, reporters in the foreground—the camera tracks him as he completes his 540° circuit, creating an oddly striking carousel effect.

But The Front Page isn’t just a film to stare at, it features some of the briskest dialogue, character work, and humor of Milestone’s career. And personally, I loved how it’s a time capsule of how early twentieth century Americans talked. There’s something strangely charming in how they talk about “hamburger sandwiches” and sending “postal cards.”
Posted by Steve Kopian at April 22, 2020