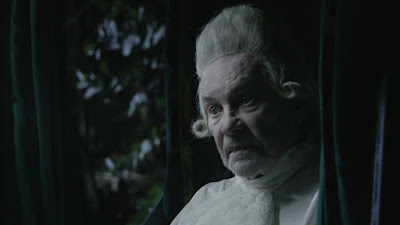 With a lot of films streaming in virtual theaters where your local movie theater gets half the money and the distributor gets half there is at least a good chance of theaters getting enough money to at least have a shot at staying open. I could and probably should repost my reviews of the films I saw at festivals when they hit the virtual cinemas but the question would then be which theater do I support? I have reposted a couple of reviews, but mostly I have not.

The one thing I (generally) will not do is repost a review for a film I don't like. With theaters struggling for cash I  don't want to prevent them from getting any money. Then again sometimes I feel my obligation is to the reader and not the theaters because I would rather warn you away from something that will make you feel ripped off. If you feel ripped off you are less likely to go back.

With LIBERTE hitting virtual theater VOD  I am taking the time to repost my review because I feel it's a big con job.  It is a film that my friends in the critical community scratched our heads over.  Even the ones who liked director Albert Serra's earlier films  were left bored to tears if they didn't walk out at the tedious nature of the film.

You can read my thoughts below, but my advice is if you want to support your local theater watch anything else they are co-sponsoring other than LIBERTE. In all seriousness don't waste your money. I wouldn't break my rule if I thought you couldn't do better elsewhere.

There is nothing quite as sad as an art film with smutty intentions. More times than not the great artist who fancy using graphic or semi graphic  or shocking sex bollocks it all up and you end up with a film that is just boring as all hell.

Boring as all hell is the best way to describe Albert Serra's still born film LIBERTE, which would be funny if it wasn't so incredibly sad. A  night of sexual escapades in the French forest before the French Revolution is in the words of Shakespeare, "sound and fury signifying nothing".

Serra's film begins in twilight as various parties arrive and make plans. I will not go into what they are but they involve sex and various acts bodily fluids and sound more like the words of ten year old who wants to be shocking. What then follows is two hours of people wandering around in the forest taking their pants off so we can see their unexcited privates while they either touch themselves or occasionally have sex. (I have no clue if it was real or simulated because frankly it's so badly done). Some bottoms are caned, and some stuff that might be shocking to anyone who has lead a cloistered life happens before the sun comes up and the audience's pain and misery is ended.

That Albert Serra managed to get this into the New York Film Festival is proof that he is a highly skilled con man. Even duller than last year's ROI SOIEL which was a record of an art installation where an actor rolled around on the floor for an hour moaning, LIBERTE makes you wonder what he has on the programmers that has gotten his films into the festival on a regular basis. Either that or the programmers really don't get out much.

I honestly don't know what the point of it is. It's not sexy. It has almost no real dialog. It's just kind of sexual acts that just leave me wondering if Serra has just had someone financed his own personal fetish film. More to the point it left me wondering why he just didn't do a google search for whats in this film... and then chose not to share his kinks with us. No offense but we don't need to know.

What kind of throws me for a loop in the festival write up indicates that the film is supposed to be about freedom, both in society and in sex. I don't see it, but if that's the case I have no idea why they chose this film to deal with the subject. If the festival really wanted to show a graphic film about sexual freedom then they could have actually gone to a some of the adult film producers and gotten a film that was actually good and heady and even sexy. There are more than a handful out there and there are any number of really good directors making challenging films in the adult industry...

Albert Serra's LIBERTE is a big nothing. It is the work of a lazy filmmaker who wants to "push boundaries" but who then retreats into the pee and poo boundaries of children. It 's the cinematic equivalent of a six year old cursing to look older.

Not recommended as a heady discussion of anything. And don't even think about this as a sex film or I will think rather sad thoughts about you.
Posted by Steve Kopian at April 30, 2020