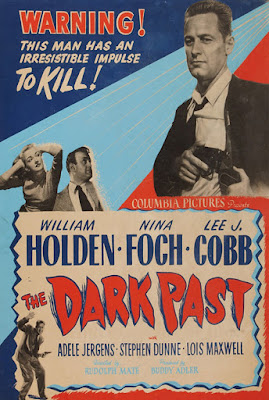 Rudolph Maté’s The Dark Past is a superb noir remake of Charles Vidor’s subpar proto-noir Blind Alley (1939). The story of a psychoanalyst held hostage with his friends and family by a group of criminals led by a homicidal prison escapee, both were based on the same play by James Warwick and both had the same team of screenwriters adapting it. Both films had experienced, reliable Hollywood workhorses directing them and both featured prominent stars. Yet it’s Maté’s remake that stands head and shoulders above its predecessor, both stylistically and in key modulations within Warwick’s overarching plot.

To begin with, it’s simply a superior piece of technical filmmaking. Though Blind Alley was released in 1939, it looks and feels like an early talkie with flat compositions and theatrical blocking (though cinematographer Lucien Ballard had some early success working with Josef von Sternberg, he only truly came into his own in the Fifties and Sixties shooting Westerns with Hathaway, Boetticher, and Peckinpah). Compare this with Joseph Walker’s photography in The Dark Past: the compositions have more depth and variety, occasionally almost emulating how Gregg Toland shot people within the spacious interiors of Citizen Kane (1941). Walker clearly used his experience shooting visual masterpieces like Only Angels Have Wings (1939) to turn his sets into chiaroscuro tableaux with rich blacks and whites. Maté was also smart enough not to meddle with the only unimpeachably gorgeous sequences in Blind Alley—two German Expressionist dreams recounted by the lead criminal after the psychoanalyst begins poking at his brain while being held hostage. (While he recreated the first dream sequence shot-for-shot, Maté literally copy/pasted a key shot from the second sequence from the 1939 film.)

But perhaps the most effective changes were in the story itself. Both films take a didactic approach to the science of psychoanalysis, patiently explaining to the audience its power to heal and reform criminals. Indeed, the story subverts traditional crime thrillers by having the heroes “defeat” the villains not with violence but with compassion. But the 1939 film betrays this thesis by having its villain gunned down by police after he’s been helped, a cynical submission to the Hays Office that demanded all violent criminals meet violent ends. In The Dark Past, the villain survives and surrenders. This “happy ending” does more justice to Warwick’s vision of psychoanalysis as a modern, humane method of reforming criminals.
Posted by Steve Kopian at April 16, 2020