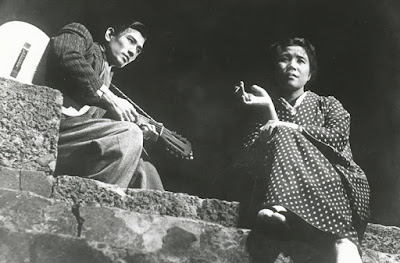 In his book Japanese Cinema, film scholar Donald Ritchie argues that in the post-war years a new sub-genre arose in Japan which he calls the “haha-mono,” literally the “mother film.” “There is no escape for mother,” he writes, “she must sacrifice and suffer.” More often than not her suffering was for the sake of ungrateful children who eventually abandon her.

Of all the actresses associated with the sub-genre, Ritchie points to Yūko Mochizuki as its queen, and of her films he lauds Keisuke Kinoshita’s A Japanese Tragedy as one of the best. Indeed, the film seems to apotheosize the suffering, unappreciated Japanese mother much as Olive Higgins Prouty’s Stella Dallas did for her American counterpart. The film follows Haruko Inoue (Mochizuki), an impoverished geisha working as a prostitute to support her two children after her husband was killed in an air raid during the war. Her son Seiichi (Masumi Taura) is a medical student who resents her and sues to get removed from the family register so he can be adopted by an elderly couple who plan to make him the head of a hospital. Meanwhile her cruel daughter Utako (Yōko Katsuragi) has an affair with a married English teacher and ignores her (it’s implied she never forgave her mother for sharing their property with her brother-in-law who raped her as a child). Eventually the two children succeed in cutting themselves off from Haruko and she throws herself in front of a train.

Western viewers who only know Kinoshita for his gentler comedies and painterly jidaigeki like Twenty-Four Eyes (1952) and The Ballad of Narayama (1958) might be shocked by the film’s cynical venom and formalist experimentation. The film makes broad use of jarring flashbacks, popping up in the middle of scenes with no transition. Consider one early moment where Seiichi and Utako eat udon together in a noodle shop. While they’re talking, Kinoshita cuts to a shot of them as children eating eating noodles in the charred remains of their bombed out neighborhood before cutting back to them in the present. The first act is particularly unusual in its use of cinematic collage, intercutting the action with news clippings and documentary footage of Japan’s societal upheaval in the wake of the Occupation. Kinoshita’s message is clear: this is a Japanese tragedy, yes, but it’s merely a symptom of a larger Japanese anomie.