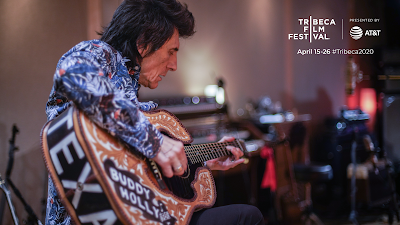 If you wanted to make the argument that this is the best portrait of the Rolling Stones, and one of the members in particular I would be perfectly willing to go along with you. If you wanted to take the argument further and say it's one of the best rock biographies, or at the very least most satisfying rock docs (insert time frame of your choice) - I will be happy to agree.

SOMEBODY UP THERE LIKES ME is a rough and tumble and not really polished but solid conversation with Ron Wood who is best known for joining the Rolling Stones in 1975, but  had earlier played with Jeff Beck, Faces and Clapton, not to mention his own solo work.

The film is a series of conversations with Wood and director Mike Figgis intercut with music, painting and talks with Mick Jagger, Keith Richards, Rod Stewart, Damien Hirst  and Imelda May who relates how Wood always says he discovered her years before she became famous but never told anyone. This is not a film so much as hanging out with your mate in a pub and having him tell you his life story. There is zero pretense and even less artifice (or is it the other way around?)

To be certain it isn't all here, but who the hell cares? Wood  is just being himself and telling tales. So often these days music bios are polished and controlled to a ridiculous degree. Don't get me wrong I loved the recent Eric Clapton and Robbie Robertson docs, but they were stage managed to a ridiculous degree. This isn't like that. This just feels like I'm sitting in a restaurant with your friend  shooting the breeze and what happens happens.

I suspect the lack of covering it all will piss off some people who want to hear it all, but that would be a less alive film. To be certain we'd know more about the details of his life but we wouldn't know the man who lives and breaths. For my money I want the living and breathing man.