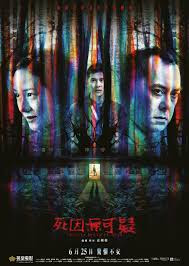 Based on the novel Black House by Yusuke Kishi LEGALLY DECLARED DEAD is the story of Yip, an insurance broker to look into the death of a teenage child. Something isn't sitting right with the declaration of suicide and his parents seem off. While there is nothing in the ruling by the coroner that suggests murder, Yip continues to pick at it...

... and to say more would be telling.

I am not going to keep my comments brief. I am doing this because I have read a couple of pieces on the film which made it clear that if you even suggest a couple of things you will give too much away.

I will say that this is is a very good and chilling film that gets darker and darker as you go. It's a kind of bleak gut punch in some ways whose ending left me feeling shaken in the right ways. The cast headed by Anthony Wong, Carlos Chan, Karena Lam, and Kathy Yuen is first rate and sell you on what is happening. What I loved was that once I had seen the film and knew what was happening I went back into the film to see the performances since this is the sort of thriller that flips once you know the twists.

This is a solid little chiller and highly recommended for anyone who doesn't want a thriller with easy solutions.
Posted by Steve Kopian at September 03, 2020