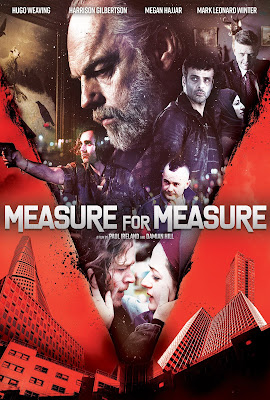 Aging crime lord leaves his apartment block when a tragedy occurs, leaving the his second in command in charge. Mean while a musician romances a refugee.

Downbeat reimagining of the Shakespeare play removes all of humor and light leaving us with a story of people just struggling to survive. It’s a moving tale powered by killer performances that breath life into it all in unexpected ways.

Truth be told the script is so good that I kind of wish it wasn’t tied in anyway to the play. Yes most of it’s stripped away to the barest of bones but at the same time even that slender teather kind of restricts this little gem of a film from fully inflating. A couple of times I kept wondering what this would have done if it had used a different road map then the Bard of Avon’s. Regardless of my quibbles this frequently stuns and is worth your time and money.
Posted by Steve Kopian at September 03, 2020