Part travelogue, part feel good film LUNANA is a film that hits every ticky box you'd expect. Extremely well done and entertaining this is a film you will most assuredly enjoy, despite the fact that it doesn't do anything special. If that's good with you then by all means give it ago. 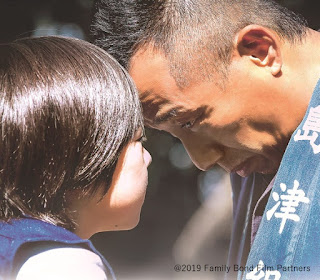 FAMILY BOND
Womanizing house builder takes a shine to a young boy and agrees to build his mom a new house- much to the annoyance of his family.

Wonderful family drama is a must see thanks to a killer cast headed by Nagabuchi Tsuyoshi as the craftsman with a mind of his own. Nagabuchi Tsuyoshi performance is the foundation that supports the entire film and it is his charming turn that makes us want to stay even when the plot occasionally takes an odd turn. Lest you think Tsuyoshi does all the heavy lifting, the rest of the cast shines as well and we completely believe everything that happens as a result.

A small confection that’s worth a look.
Posted by Steve Kopian at September 08, 2020