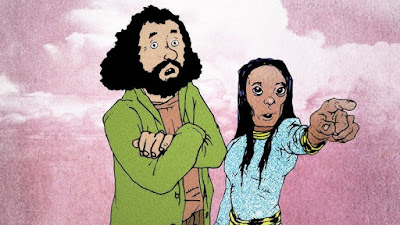 This portrait of controversial cult leader Raël was started by filmmaker Yoav Shamir when was given an award and made an honorary member of his group. What follows is the story of a prophet and his followers.

When I heard the title of this film my ears perked up. I love alien stories. Then I heard that it was about Rael and I got deflated. While I'm sure Rael's followers are happy I have never really felt any connection to the new agey group and hesitated actually watching the film.

For those who don't know Rael is a 70 something Frenchman who was once a successful singer. Claiming to have been contacted by aliens with a message of universal brotherhood he started his movement  which has him traveling all over the world trying to do good. He also got into trouble claiming to have created human clones

Straight forward and unsenational filmmaker Shamir wrestles with the notion of what is a prophet and what the hell is Rael and his followers up to, if anything. While the straightforward approach makes the film seem fair, the reality it is also kind of dull because ultimately these really are just people. My attention drifted and it took me two weeks to write this piece

While not even remotely bad it is so bland I can't recommend it.
Posted by Steve Kopian at September 01, 2020