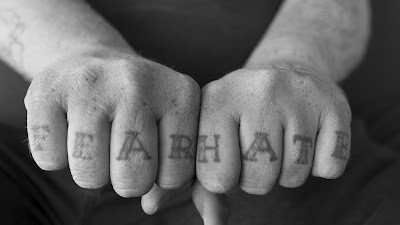 Excellent portrait of the group Life After Hate, which was founded by former white nationalists in order to help members who want out of the groups to get out. The thinking is that if they could do it so can anyone else.

There have been several recent documentaries where people have explored the groups from the outside but this is the first feature documentary that I’ve seen where we follow former members trying to get out and deal with all that is surrounded with leaving. As good as the other docs are on setting the table, and as good as recent narrative films such as SKIN have been in covering similar ground, HEALING FROM HATE is head and shoulders above them. Not only do we see the emotional toll leaving the movement takes but we also truly come to understand how inviting the hate filled movements are. For the first time there is a real explanation of why and how people join. It isn't something amorphous and glossed over, we really see how the groups suck people in. And we see chillingly how President Trump and the far right use the same methods to inspire his supporters to hate those different than themselves.

For me one of the biggest revelations in discussing the recruiting of members was one that I should have caught on my own but never did, and that the white nationalism and bigotry comes from a misplaced sense of entitlement. These are largely white young men who were promised a world they can’t be part of or make work. As a result their broken sense of the world looks for a reason they can't function and hating someone who isn't white is an easy way out.

And I was filled with hope because the film shows us that you can stop hating and rejoin the world. To be certain it isn't easy, but we see people can change. I was moved by a particular discussion around the shooting at a Sikh Temple  where a former believer explains the change will come when you start to change the way you view yourself. The more hatred we spew is related to the amount of feeling of hate and disconnection we have for ourselves. When we connect with ourselves we reconnect with the world.

I was moved somewhere beyond words, by that and many moments in the film.

And what I love about the film is that the neither the filmmakers nor the group Life After Hate do not shy away from dialog. They present the opposing view point and engage with those who hate, for example there is an unplanned discussion with hate  monger Richard Spencer which goes a great deal with keeping the film from being a polemic

HEALING FROM HATE is a great film. It is a required viewing for anyone who truly wants to understand the hatred that is running rampant in America and the world.
Posted by Steve Kopian at September 01, 2020