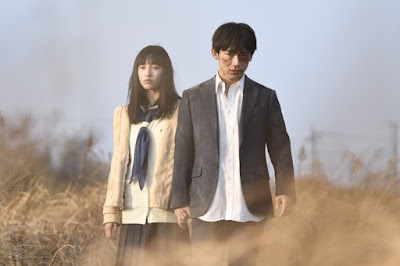 Sabu comes through yet again with one the few films I’ve seen at this year’s NYAFF that is truly great. As the NYAFF people swallow their tongues at my saying that, understand that while they have programmed a lot of good films, but the ones that make you go wow, that make you fall in love and want to take them home to mama have been missing (then again the great ones may be playing only on the app which with me technologically backward can’t use)

This time out Sabu returns to two sorts of stories that he is really good at portraying, notions of Karma and destiny (look at his early body of work) and romances (look at Chasuke's Journey). However this time out he mixes things up with horror, comedy, gangster films and a few other things as well. The result is a film that delighted the hell out of me and explains why Sabu is one of my favorite directors working in the world.

Mixing Romance and philosophy with horror comedy yakuza films and a touch of samurai, Dancing Mary is about a haunted dance hall that everyone is afraid to tear down. The ghost won’t let anyone work on demolishing the place and psychics who try to get to the bottom of it end up in the hospital. A low level guy in the construction company is tasked with sorting it out before his bosses have the yakuza destroy the building for them. Finding the right psychic he discovers Mary refuses to leave because she is waiting for her lost love. The pair then has to run down the missing lover if they want to put Mary to rest.

This film is a joy. From start to finish, top to bottom this film just delights with each turn. Sabu, a master of the mash up does what he does, which is tell his story, his way with out worrying if it’s crossing genres. Having spoken with the director on several occasions he has made it clear genre doesn’t matter, the story does. He tells the story and lets it go where and how it has to. As with most of his films this always results in something magical and glorious.

Frankly films like this are the reason I love the movies. Film directors and artists like Sabu are the reason that I still hold out hope for mankind, because through their work they show the true nature of the human condition.

Highly recommended, this is one of favorite films of 2020
Posted by Steve Kopian at September 01, 2020