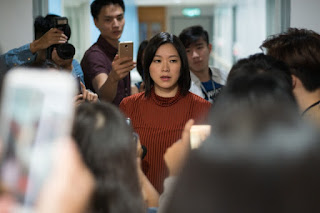 Rich student  kills a poorer student. We then watch as events spiral out and the true number of the victims is revealed.

One of  at least two similar films playing NYAFF this year (The other is FORGIVEN CHILDREN) is, on it's own terms a good film. It reveals how the stupid acts of some people have unexpected consequences that no one can live with. If you can take it on it's own terms and want a heavy drama this film is for you.

Unfortunately for long time attendees of NYAFF the film suffers from not only being similar to another film this year, but also to at least one film from almost every other year from the 5 or 6 years. As much as I love NYAFF one of the most frustrating things about the fest is it's drift into what feels like cookie cutter programming.If you've been to the fest you know you will get at least one of these films every year just as you know you will get one travelogue like film from an unexpected country and several other things. While the films are never bad, more often then not they feel like they were picked via ticky box rather than because they were outstanding. VICTIM(S) is good but not outstanding.

Apologies to the festival, but it's true.
Posted by Steve Kopian at September 04, 2020