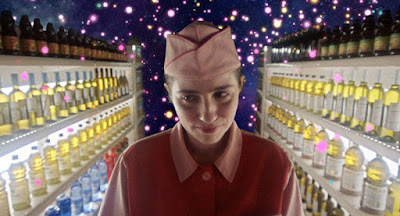 35 year old grocery store clerk who hates change and loves the trippy Cosmic Candy has her life turned upside down when the ten year old next door breaks into her home and looking for a place to crash after her father disappears for not paying some seedy guys the money he owes.

Quirky whimsical comedy is either going to delight you and be one of the best films you’ve seen all year or it is going to be the wrong sort of saccharine and make you shake your head in disbelief. Put me in the latter group, since I found this film didn’t work for me since director --- was trying awfully hard to win me over.

However despite my feelings for the film don’t let that stop you if it looks interesting. I had read about the film before it was offered to me for Fantasia and I knew that reaction ran the gamut, I knew there was a chance I wouldn’t like it but I wanted to see it because of how people were expressing themselves about the film made me want to at least experience it. I really don’t hate the film, I just liked it. I think the unadulterated love expressed by some people on line over sold it to me. Its kind of like what happened with AMALIE.

Currently playing Fantasia its worth a look for anyone looking for whimsy
Posted by Steve Kopian at September 04, 2020