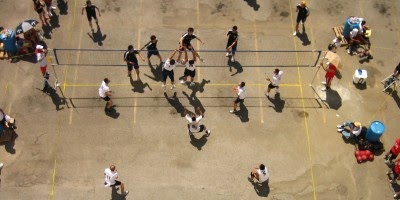 "My goal is not to win this thing, my goal is to get enough kids to keep this thing going"

Portrait of 9 Man volleyball which was developed in the 1930's by Chinese immigrants living in Chinatowns across the country. The game is played only by Asian men (No women or non-Asians allowed) and has developed into a cult like status in some areas.

Following several teams from across North America over the course of a summer the film shows us not only the game but the social context that the game developed in and is now played. Originally it was a way for the men to blow off steam and relax at the end of the day and week, the game became more as tournaments were set up in various cities. This allowed the men to connect with people everywhere.

I like this film a great deal. In many ways this is exactly like hanging out with good friends and goofing off. I say this because the film is so full of great characters that it's like hanging out in your backyard shooting the breezy.

That doesn't mean the film isn't full of information beyond the guys. The film is a wonderful portrait of the Chinese in America over the last century plus. Its a look into the rise of Chinatowns, the rise of the game and how the Chinese Americans who play the game are trying to hold on to their culture. The discussion of the Chinese experience is amazing and revealed a great deal of information that I never knew and was never taught, even in snooty PBS documentaries. This is history as lived by the regular guys and as such much more enlightening then the academic history.

How much do I like this film? So much so that I'm regretting not being able to attend the DOC NYC screening since if some of the people in the film are in the house for the Q&A it could be a lot of fun.

Definitely one of the films to see at DOC NYC if you want to have a good time with good people.

The film plays Saturday at SVA for more information and tickets go here
Posted by Steve Kopian at November 11, 2014