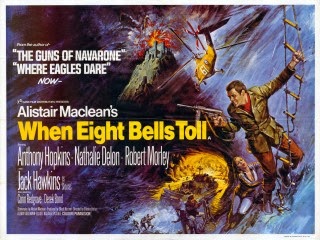 Anthony Hopkins is Philip Calvert is a Navy man who operates best under pressure. When shipments of gold go missing he's brought in to try and locate the missing ships. The trail leads him to the coast of Scotland and some rich Lords.

An attempt to start a franchise similar to James Bond via the pen of Alistair MacLean.  It's a ripping yarn full of good action, good mystery and a kick ass hero in the form of Anthony Hopkins. Hopkins is the reason to see the film, his Calvert is a mean nasty guy who does the job he's given to do even if it means that he ignores later orders. He likes to kill and he's good at it (the violence in the film is nasty). There is a moment where he kills a man who snuck on his boat that is chilling. The delight in his eyes would put Hannibal Lechter to shame. Actually the character is probably closer to what Ian Fleming would have wanted in a James Bond, though Calvert is less refined.

The problem with the film is that the music is bombastic and over done, awful doesn't begin to describe it. More often than not the music works against the mood of the film pulling you out of the action. From my point of view the film's music is what makes this film less loved than it should be.

This film surprised me. I was shocked at how good it was. I'm unhappy that the film never went to series because the possibility of more Calvert adventures is intriguing.

Out on DVD from Europe and it is available streaming from Amazon and elsewhere.
Posted by Steve Kopian at November 05, 2014