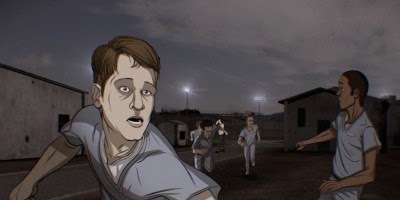 Its a terribly sad thing to consider what DeFriest might have accomplished had he not been in trouble. A natural mechanical genius DeFriest could take apart anything and put it back together again. After he was married he and his wife made money simply by traveling around fixing things for people.  That all went away when DeFriest's father died and he took the tools his father promised him. His step-mother called the cops, and instantly got out of hand when DeFriest fled. Sentenced to four years time began to get added on with each escape (not attempt, escape, more times then not he got away for a bit).

There is a great story here. DeFriest's escape attempts are often crazy (making guns out of unexpected things, spiking coffee with LSD), the fact that the authorities won't let him out, while understandable, is kind of insane. Its a wild tale.

The problem for me is that the film's pacing is much too slow. The result is interest fades. Well not so much fades but makes you wish that they would pick up the pace, I was about 40 minutes in when I realized I still had over an hour to go.

Don't get me wrong, its not a bad film by any stretch of the imagination, it's just too leisurely in the telling.

Worth a look, but you may want to wait for TV where you can pause it on the DVR

For more information and tickets see the festival's film page.
Posted by Steve Kopian at November 14, 2014