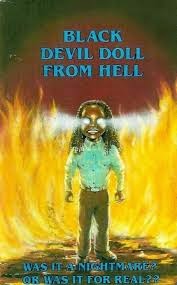 Shot on video monstrosity about a repressed deeply religious black woman who buys a ventriloquist dummy with dreadlocks that happens to be possessed. The Dummy seduces her and then takes her over turning her into a sex fiend.

As they say you have to see it to believe it. Obviously the intent was to make a serious film about the fall from grace, yadda yadda yadda, but the result is painful, Mostly because scenes run on and on and on with no end in sight. We get a long phone conversation while the camera pans around the house showing all the religious items in it. The opening credits take almost 7 minutes of screen time (thats about one tenth the length of the film). The music is awful. And the sex scenes...well did you ever want to know what it would look like if Charlie Mc Carthy ever managed to marry a real live girl? Yea, me neither. This is a painful film that is only recommended for seasoned bad movie lovers or mental patients, preferably people who are both. This walks that fine line between MST3K good bad and mind destroying bad.