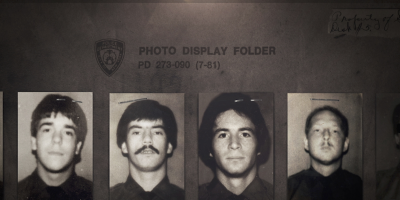 The Seven Five is the story of Michael Dowd, a cop in the Seven Five precinct in East New York Brooklyn from 1982 to 1992. The 75th precinct was in the early 80’s and 90’s, one of the most dangerous precincts, if not the most dangerous in the city. The area looked like a war zone. The number of murders each year was around a thousand. Drug dealers and gangs controlled the streets. The cops were fighting a losing battle. Things were so bad the cops figured that life was too short and they weren’t making enough, so they decided to take something for themselves.

Using Dowd’s testimony to the Mollen Commission as a backbone, the film weaves together pictures, surveillance video, news footage and conversations with Dowd, his partners in crime, the drug dealers he dealt with, and the cops who hunted him, the film presents events from all sides and so puts us into life and crimes of a “good” cop.

Dowd is a great talker. Bold brash and completely unafraid he lays it all out, from the post Internal Affairs lecture on how to be a good cop where his teacher told him the real way to be a good cop (don’t rat on anyone. Stand behind your brothers in blue) and then went to his frustration after two years on the beat when he started to take what he could. It all spiraled out from there.

Director Tiller Russell managed to get all the right people, on all sides of the law, to tell the story. Not only do they add details and shading they add wonderful color and a sense of life to the proceedings. More importantly when late in the film multiple versions of events are being told they make it easy to follow who is doing what and add layers of suspense as to how it’s all going to come out.

Actually awards should be given to Russell and his editors Chad Beck and James Carroll for making a film as near perfect in its telling as you’re ever likely to see. I wouldn’t change anything about it.

The best thing I can say about The Seven Five is that it’s like hanging out in a bar with your friends and you’re listening to the best story teller you know tell you the most involving story you’ve ever heard. You sit there rapturous hanging on every word, completely forgetting about your drinks waiting for the next twist. The upshot is you’re out way later than you ever expected- or in my case I was up way past my bedtime.

To put it another way this is one of the most compelling, best documentaries, nay best films of 2014. It’s a film that grabs you and sucks you in and doesn’t let you go until it spits you out at the other end exhausted , and wanting desperately to climb back on and go for another ride all over again.

You must go see this when it plays Friday at DOC NYC. For more information and tickets go here.
Posted by Steve Kopian at November 10, 2014