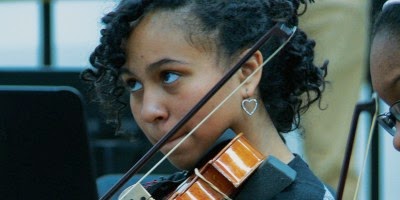 Ben Nile's look at the Juilliard Musical Advancement Program, which takes inner city kids and mentors them into being better musicians and transforms the kids and their families is a wonderful look at the transformative nature of music.

The film follows six kids and their families as they go through the two year course.We watch the ups and downs as the kids change, becoming better musicians.

I'm going to be completely honest here and say I don't have a great deal to say about the film. While it is quite wonderful and quite moving,the film has gotten lost in the wave of films from Doc NYC.  The film's only real flaw- that it's similar to any number of other similar films-would be fine if I was seeing this as a one off, the film recedes  when being seen in the middle of three or four dozen other films all fighting to stand out with their uniqueness.

I know I should take this film on it's own terms but sometimes in covering a festival you can't...

On it's own terms its a touching look at kids and music and really should be seen.

For tickets and more information go to the film's festival page
Posted by Steve Kopian at November 16, 2014