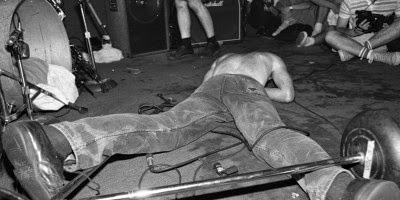 SALAD DAYS is a look at the DC punk scene from 1980 to1990(roughly). Made by guys who were there, the director is one the boy journalist we see in the film, its filled with everyone who was anyone in the scene the film documents the days and nights of the various punk bands.

For me the film is annoyingly near great.

Taken on its own terms and as pieces the film is absolutely amazing. You’re placed in the DC music scene is a way that puts you in the clubs and houses where the music was percolating better than most films on any subject. We really are there just as if we were dropped into the say the 930 Club…

First, as I said the film doesn't bring you into the story so much as drop you into it. There isn't a set up so much as a few statements and away we go with little context for things. What was things like before? We don’t know. Having Henry Rollins talk about how music had to be wonderfully produced until he heard the Ramones is okay but it doesn't say enough. What was the music scene like before? What about outside of DC? Were these guys and gals influenced by anything outside of DC? We don't know- the whole thing is a bubble.

Next the film kind of assumes you know what they are talking about. They mention bands and groups and members and unless you have a bit of knowledge you’ll feel a tad lost (more so because the band members moved around). At other times there are times where people are talking about events that I had no context for....

...which brings me to the last point the film will pick up a subject or jump through time with no ground work it just jumps into say the funk band or female bands- without really linking them into the narrative. We're just on to the next thing. I understand they want to stay away from a narrator or intertitles but some links are needed. We need to know more than we do…or at the very least we need the film to pull it all together in the end into a whole, it never does.

To be honest the problems could be solved if the film were longer-lord knows there has to be enough material, I mean dozens of people are interviewed, put more in and make it flow. I won't mind since what is here is so compelling I would have sat for another 100 minutes without a problem.

Don’t get me wrong this isn’t a bad film. It’s nowhere near being a bad film, it’s just that it’s so incredibly close to being a truly great all time classic film that I’m annoyed it just missed the target. Seriously everything that’s here is choice and amazing, with Dave Grohl's kick ass final statement about DIY sending us off with a cheer and being one of the best final statements in any film in the last five years.

Forgive the nitpicking but I want the thrill I had while watching the segments and sequences to carry over to how I feel about the whole film.

The screening at DOC NYC is long done but the film will be hitting theaters soon and is a must see for anyone who loves music especially punk.
Posted by Steve Kopian at November 23, 2014