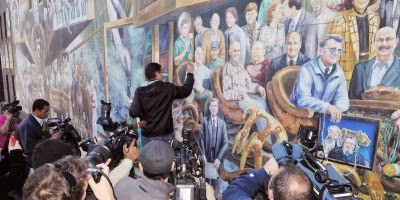 Surprisingly fair minded look at the insanity of what happened in the wake of the Jerry Sandusky arrest at Penn State. The film is not concerned with the crime itself, rather it's concerned with how people reacted to it and what it means for the future.

I was not prepared for what I got with this film. I mean that in a good way. I thought that this was going to be rehash of the crimes of Sandusky and then a little finger pointing at the media and the people involved with the cover-up. What I got instead was a film that doesn't really deal with what happened to the boys, rather it deals with issues like, the role of the media at times like this, hero worship, the rewriting of history, whether doing what is required is enough and the whole notion of protect the winning team practiced by many colleges.

If I'm completely honest I should say that I can only write so much about this film because in order to really discuss this film I need to see it a third time, or maybe a fourth. I say this because When I sat down to watch the film I did so with notebook in hand and ten minutes into the film I had stopped writing and had just watched. The second time through I did take notes but found that I wanted to go back and replay sections of the film to see how they reconnected with other pieces. I'd have gone through again but there were other films at DOC NYC  to see.

The film seems to cover every base with the exception of speaking with Sandusky himself or some one official from Penn State's Board of Trustees. Students and faculty of the college are interviewed. Alumni get to say their piece. Joe Paterno's wife, children and biographer are interviewed. We hear from Sandusky's adopted son and victim of his father's crimes. Representatives from almost every category are interviewed. News footage and news out takes are included in the reporting. It all seems to be here...

And when the film ends so many questions will be running around in your head- chef among them will be how are we supposed to react to a man who does what he's supposed to, even if that isn't enough. That's the question that hangs around Joe Paterno, did he do enough by doing only what was required? His family says yes, many others say no. And the split as to the rewriting of his legacy is also a matter of debate- even by those who think he didn't do what they feel he should have.

I have no idea what to say about the film except see it. I say this not as a cop out or short hand but rather because I need some one to discuss this with. I need some people to bounce ideas off and until you see the film I can't do that.

I also say this because this is not the sort of film one reviews, rather this is a film one discusses, for hours over dinner or drinks. So take some friends and make some post film dinner plans and go see one of the most truly thought provoking films of the year.

The film plays on November 17th and 19th (with the director in attendance) at DOC NYC (and opens in theaters on the 19th)and is a must see. For tickets and information go here.
Posted by Steve Kopian at November 15, 2014