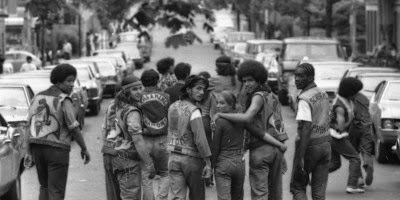 Starting in 1963 and the  formation of the Ghetto Brothers gang RUBBLE KINGS charts the course of the Bronx from Utopia, to hell hole to it's reemergence as a birth place of Hip Hop.

At the time the film begins the South Bronx was a collection of mixed cultural make up. However the plans of Robert Moses set about tearing up the neighborhoods and ultimately leaving only the poorest of the poor.As the area declined violence and destruction escalated. Gangs formed on every block simply because it was the only way to remain safe. Relating the stories of their lives the survivors,Ghetto Brothers founder Benji Melendez chief among them, we watch as the South Bronx goes to hell and then at the moment the Bronx was just about to explode turns the corner and comes away from the edge.

This is an amazing film. Driven not only by the personal stories of those who lived it, including ex-Mayor Koch, but also a wealth of film and video from the time. It would be cliche that the fil is almost like being there, except that it really is.

A gripping epic story this is the sort of thing that makes you wonder why this hadn't been turned into a movie. This is the sort epic tale that would have been the fodder for grand a Hollywood production when Hollywood was making epics.

I'm amazed that the telling of the story is only 70 minutes long since this film is so full of stories you'd think it would be twice as long.

Wow. One of the must see films at DOC NYC

For tickets and more details go to the films festival web page.
Posted by Steve Kopian at November 14, 2014