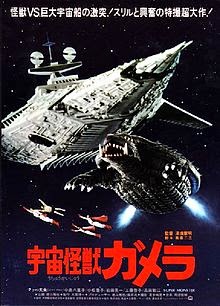 This retread of a film that takes really crappy new footage of three girls as super heroes who fight an alien coming from space with the help of a young boy and Gamera. Much of the new footage seems to have been shot in a hotel room on a single afternoon. All of the Gamera scenes are cut from all of the previous color Gamera films and arranged in some way to tell this less then exciting story (none of which match any other footage).

While I know the original Japanese film is an el-cheapo production it doesn't help that the American dub is so bad that the voices aren't even remotely linked to the mouth flaps.

It’s awful, by any rational standards its really really bad.

As something to laugh at I'm sure its a blast and one wishes the MST3K guys had had a chance to pick on it, but at the same time its like watching a favorite friend hit hard times. Thankfully this film was largely unseen outside of Japan until relatively recently. I never knew the film existed until I saw a reference on the internet. I’m guessing the fact that it came into existence well after all the other films run their course kept it out of circulation. Within my group of monster loving friends by the films creation in 1980 Gamera was largely a joke thanks to the juvenile later films. The Gaos films were cool but the rest sucked.

Actually looking back the other films aren’t that bad in retrospect, it’s this film that sucks.

If you must see one of the original run of Gamera films- see any of the others, avoid this one like the plague.
Posted by Steve Kopian at November 26, 2014