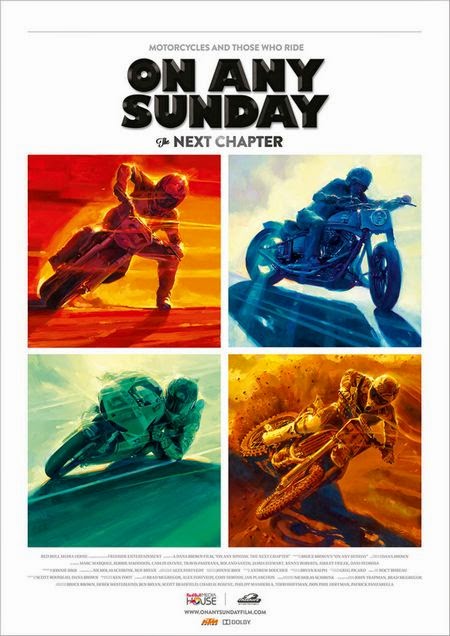 I'm going to review this in two ways- the first as a motorbike fan who is undemanding, the second as a person looking for something more.

As a film for a motorcycle fan or someone looking for really cool footage this is blast and a half. Ten minutes in I was enjoying all of the sights and sounds the films put forth. Say what you will its cool seeing Motor GP on a big screen, as is many of the stunts. This is very much a big screen movie that requires a huge bucket of popcorn and drink of choice.

On a purely visceral level I highly recommend it.

Being more critical the film has a couple of problems, minor to be sure but still problems.

First for all the talk about how motorcycles bring people together they should have shown a bit more togetherness. Yea it's there in a flashes and in words, but togetherness thing is mentioned like every third minute and then it doesn't really go into enough detail.

And thats the other problem with this film, it covers way too much in its 95 minutes. I think there is something like 14 segments, most of which blow by at breakneck speed. I know time is limited but I would have liked more detail on something like the Hare Scramble, or the prosthetic arm or the specially built bike for Doug Henry who was paralyzed or most of the segments. On a purely intellectual level the film needs more information....

On the other hand fifteen minutes in you're just going to forgive the Discovery Channel presentation  and just be going OH COOL repeatedly at the images.

An absolute must see on the big screen. If you must do TV get the biggest one you can find.

The film hits theaters and you really must go.
Posted by Steve Kopian at November 04, 2014