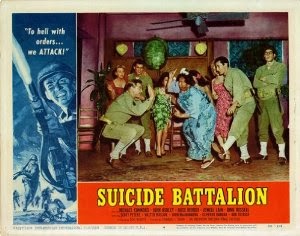 Terrible 1950's war film about a group of men needing to go on a dangerous mission which is to blow up their old out post which is about to fall in to Japanese hands, or may have fallen into Japanese hands or something.

It's all well and good for the first ten minutes which sets everything up. Sadly after that it goes in the toilet as the men get a 72 hour reprieve, so they mingle with the locals, and other nonsense occurs for at least 25 minutes of screen time. What the romance and soap opera is doing in a war film like this is beyond me. After that the film picks up (relatively speaking) with tons of stock war footage which doesn't match the studio stuff so people are reacting to things that obviously aren't endangering them.

It's horrible and a fine example of filmmaking at it's worst.

It's a film that should be avoided.
Posted by Steve Kopian at November 24, 2014

Email ThisBlogThis!Share to TwitterShare to FacebookShare to Pinterest
Labels: american, not worth the effort, war