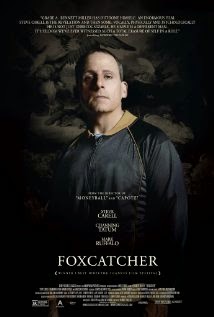 I thought it was one of the best films at this year’s New York Film Festival. I also completely understand how some people didn’t like it, but for me this is one of the few “Oscar” front runners deserving of the talk (Birdman and Whiplash are the other films)

While I won’t swear you’ll like it, I do think you should see it.

Here’s my piece from the New York Film Festival on the film:

Foxcatcher is a great film. It’s a film that perfectly lays out a certain headspace and forces its audience to live there for two hours.

The film is the story of Mark and Dave Shultz, two gold medal winning Olympic wrestlers who get hooked up with John du Pont, a billionaire who wants to train wrestlers for the glory of America. du Pont’s plan relies on getting both of the Schultz brothers to come stay at his Foxcatcher estate. Mark agrees to come and try and get his brother to join them. Unfortunately Dave doesn’t want to come being happily settled with his family. What transpires is a story of madness and murder.

The big talk about the film is about Steve Carell and his chameleon like performance as du Pont, and while he is excellent creating a cypher of madman, the real talk should be about Channing Tatum as Mark and Mark Ruffalo as Dave. Tatum is amazing and if there is any justice he’ll get a nomination over Carell since he makes Marks‘s pain of just being alive tangible. You can feel his pain in a way few performers have ever managed to express. It’s a performance that takes Tatum out of the good looking actors who don’t do much into the realm of being a real actor who doesn’t need his looks to get by.

Mark Ruffalo as his brother is scary good. Bulked up to play Dave with a balding head of hair and full beard I didn’t recognize him for about 15 minutes of screen time. He is like Tatum, scary good.

The film is in some ways a mediation on events. Some details are not spelled out, we are just observers of what the film shows us. Details of events before the events in the film are lacking. The film also takes a few (possibly unfortunate) short cuts to show us the decline of the characters. It all creates a head space that is both other weirdly and deeply disturbing.

Its clear early on that Mark is looking for something more. We can feel the desperation in his life. We know why he jumps at the chance to work with du Pont. Likewise its perfectly understandable why Dave doesn’t want to go. He’s happy in a house and a home and a steady gig for the first time in his life.

As for du Pont, it’s never clear what his motivation is. He’s a man who has everything and yet is still chasing something. He’s a man who wants to make his own way in the world but has no real clue how to do it. We can guess some of what he’s up to but not all of it. His world is big and shiney and full of very empty spaces.

I fell into the film. There was something about the way it presents it world that intrigued me and pulled me in. I was willing to go with it along for the ride, where ever it took me. I was willing to forgive any bumps in the narrative because it was genuinely making me feel something, discomfort, curiosity and fear. For me the strengths of the film all came together into a glorious whole that doesn’t feel or act like any other film.

And what I love about the film is that director Bennett Miller doesn't give us answers. He throws it all out there and lets us make up our own minds. Its a brilliant move that most directors wouldn't have been ballsy enough to do.

I know some people have been less generous to the film despite the Oscar buzz. Two friends after the New York Film festival screening were bemoaning the film’s flaws and short cuts (the depiction of drug and alcohol use for example). I didn’t like them either but I was okay with them. They didn’t pull me out of the very powerful spell of the film.

I’m on record as saying this is the first film I saw this year worthy of the Oscar buzz. I need to correct that, this is the second one since I saw Whiplash two weeks earlier and that too is worthy of Oscar praise. Either way, first or second, this this is one hell of a movie and one of the ones at the top of 2014’s cinematic medal stand
Posted by Steve Kopian at November 10, 2014