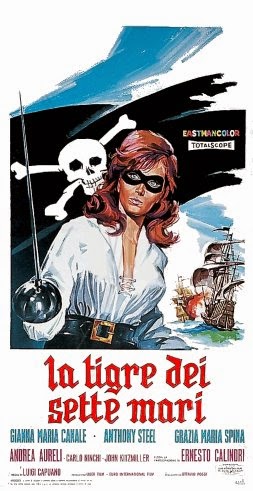 When the Tiger of the Seven Seas decides to retire, his ship is up for grabs. While many people want it, its won by the Tiger's daughter, Consuelo, who bests the man she secretly loves. When the Tiger is killed later that night, Consuelo's love is framed. However before he can be hanged the men of Don Indigo attack the pirates. Its all a plot, hatched by the Don's evil wife, to find out where Tiger's vast treasure is. What follows is a grand game as loyalties are tested and everyone tries to find out who has the loot.

Epic pirate adventure is a great deal of fun. Exactly the sort of European film that played endlessly in the late night hours for decades on free TV until cable over took everything and we ended up with hundreds of movie channels- none of which run films such as this any more.

For my money this is a kind of perfect entertainment. Its a film with few pretensions beyond telling a good story and being entertaining this film manages to create a wonderful place of comfort. Watching it we don't have to think. We don't have to worry about if the good guys are going to win or if the bad guys are, we know that with certainty, everything will be okay in the end . The highest praise is that the film is a kind of cinematic comfort food.

Highly recommended for anyone tired of big over blown Hollywood productions
Posted by Steve Kopian at November 29, 2014