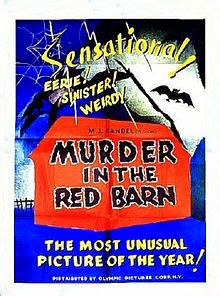 Based on a true story that was spiced up by Victorian writers , The Murder in the Red Barn is one of Tod Slaughters more restrained outings. I'm guessing that that this was the result of the film coming early in his film career.

The film has Maria Marten, the daughter of a farmer in love with Carlos the Gypsy. Because he's a gypsy she can not marry him. She dallies with Squire Corder who takes an unhealthy interest in her. When Maria becomes pregnant and the affair is on the verge of being revealed Corder kills Maria and frames Carlos.

A dark thriller the film is not as over the top as later Slaughter films which is bothe good and bad. Its bad because if you're looking for Slaughter to ham it up and chew scenery you'll be disappointed. Its good because the film plays like a really dark thriller where you know it's going to end badly for pretty much everyone.

I like the film a great deal and this and probably Sweeny Todd are probably the two films of Slaughter's that play best for people who aren't fans can relate to. I know Sweeny and Red Barn are the films I suggest to people to give them a taste of Slaughter.

A word of warning: The listed running time for the film is 70 minutes however the prints of this film can run as short as 55 minutes. The shorter prints are not fatally wounded , they just seem to be missing "something.

Those curious about the actual murder, it seems that Maria was having an affair with Corder and desperately wanted to marry him.  She did get pregnant and on the night she and Corder were to elope she disappeared (some accounts say she gave birth and the baby was murdered). Letters began to appear from Maria saying she was okay. However  Corder was found in London with a new family about the time Maria's body was found.

An interesting bit is that the sketch of the real Maria Marten (which was based in part on her sister) looks a bit like Tod Slaughter in drag.(see the picture to the right)