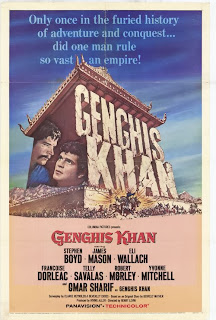 A couple of days before Thanksgiving I stumbled on the head scratcher Genghis Khan starring Omar Shariff on Turner Classic Movies. I have the film in a Warner Archive edition, but like the other 10,000 other films I still hadn’t seen it cracked it open. Since it was on, and since I had only missed a couple of minutes I sat down with my dad and gave it a go.

The film follows the rise of Temujin from lowly dreamer to master of most of Asia. It largely follows his battles with Jamuga who split over the love of a woman. It has almost nothing to do with reality other than having a few historical characters in it.

There are two ways at looking at the film- The first is as a big budget Hollywood action adventure film. The second way to look at it as a potentially offensive Hollywood dress up film where there is nary an Asian is to be found.

As a spectacle and grand adventure the film isn’t bad. Actually its quite good in the same way that most Hercules films are it’s Spectacle for spectacles sake putting stuff on the big screen you can’t get on TV. It’s a mindless popcorn film.

The problem is that the film completely filled with Western actors, and other than the crowds, there is only one Asian name listed in the acting credits. It wouldn’t be bad when you consider that outside of the location and the dress everyone and everything just sort of is. For all the good it does this could be a western but in Mongol drag. Had the entire cast played it straight and not tried to be “Asian” you would never have noticed anything, but several of the actors, James Mason in particular plays things so over the top and silly as to make you wonder if he was on some sort of medication at the time.

Thinking about it Mason pretty much wrecks the film. Take the worst stereotype portrayal of a Chinese man and make it worse. Squinting (in a manner worse than Roland Winters in the Charlie Chan series) to make his eyes “slanty” he puffs out his cheeks and has big toothy grins that reminded me of a live action version of Joe Jitsu from the animated Dick Tracy TV series. His delivery of the lines makes him sound like a fortune cookie. Had he managed to make it work and not be a cartoon I wouldn’t have cared, but it’s so out of place as to make me feel uncomfortable. I mean even by piss poor Hollywood standards its really bad. You can’t not notice it and he wrecks the film pretty much single handedly.

Assuming you can get past Mason’s poor performance, or at least stop laughing the film is pretty good. The drama is good, the action adequate and the spectacle pretty cool. I don’t know if I’d go out of my way to see it again, but I’d certainly watch it if I came across it on Turner again.
Posted by Steve Kopian at November 03, 2014