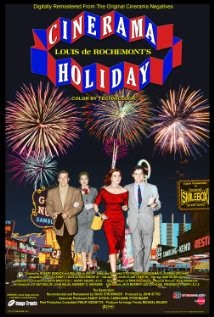 Second of the Cinerama films is better than the first. Instead of a scatter shot mix of visual delights and over long sequences the film instead follows two couples on holiday, one from the US who goes to Europe and the other from Europe who goes to the US. The film then ends in  a truly meta moment when the couple goes to the Cinerama theater in New York to see the film about their travels.

I really like this film a great deal. Where This is Cinerama was a weird collection of you are there moments, this is has some narrative thread as we watch the couples travel around the various continents. Yes the sequences are clearly staged for the camera, but at the same time they are more naturally done so so you feel as if you really are there. The opening Cinerama sequence of flying over the Alps is truly amazing and it's light years better than the flying sequence that ends the first film. Equally stunning are the numerous railroad sequences both in the US and Europe that pop up all through the film.  Equally killer are the sled and ski runs.(if you get the Flicker Alley DVD/Bluray release you MUST watch the extras which include a story about trying to film the ski sequence)

What I love about this film is that it very much puts you into the locations where the action is taking place, be it Switzerland, New Orleans or San Francisco or Paris.We are really in these places at the time the film was made.

If there is any real flaw in the film it's that several sequences are much too short. For whatever reason many of the American sequences are very short and seem to remove great chunks of the trip. There is talk about being in America for many weeks but the adventures seem cover a shorter period. The film also seems oddly devoid of spectacular sequences- yes there is some spectacular shots but nothing like the sled ride or some of the snow covered train rides.(And the Paris sequence has more great scenery but not not action).

Flaws aside I really like the film a great deal and when the film finished I tore into the extras on the DVD which include interviews with the people involved, the break down reel (which has some great stuff on it) and other goodies.

Definitely worth tracking down, especially in Flicker Alley's DVD/Bluray set.
Posted by Steve Kopian at November 04, 2014