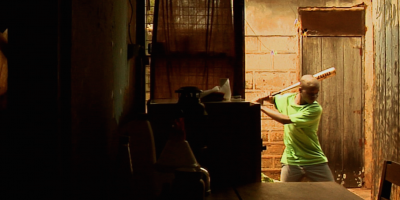 Damn near perfect baseball documentary about how a Ugandan Little League team made a run at going to the US to play in the Little League World Series. Say what you will, and I will say some stuff in a moment, this film had me getting misty several times over its 75 minute run time.

Baseball was introduced to Uganda in the 1990's when missionaries brought the game to the country. The game took enough of a foothold that in 2010 an American millionaire in the country was asked to help set up a training program. A field was built and training facility was constructed. What happened then was a team was fielded and sent off to Poland to play in a qualifying round in order to go to America. What happened then is the story.

If this film was slightly edited and the pace of the first half picked up this could very well be considered one of the truly great baseball documentaries you're likely to see. The problem with the pacing results in a feeling about 40 minutes in that the story is done. Its not There is a great deal more to go-unfortunately it feels rushed (it's really  not) compared to the leisurely first half.

You have to stay with this film, you have to make it to the second half and if you do I think you're going to be richly rewarded.

A beautifully told film about the way that sports can change people for the better and bring people together, OPPOSITE FIELD is a film that will make you misty.  It won't be in big moments but in small ones, a wonderful play, the game played against Dubai, and what follows after the team goes to Poland will move you and make you feel pretty damn good. If you're coming in cold and don't know the whole story the twists and turns of the final 25 minutes are going to really surprise you.

The film plays on the 17th and 18th. For tickets and more information go here. (The screening on the 18th is at 10:45am and is the perfect excuse to play hooky)
Posted by Steve Kopian at November 15, 2014