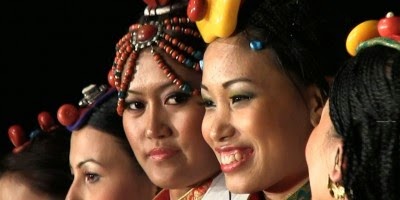 Doing what the best documentaries do, namely showing us something we've never seen or expected and pulled us into a new world, MISS TIBET is a real delight. While film is nominally the story of Tenzin Khecheo, a young Tibetan woman living in Minnesota who enters the Miss Tibet contest in India, the film  is so much more becoming an examination of Tibetan exile culture, what it means to be Tibetan and how the country and it's people are perceived, by the world and by Tibetans.

The film begins with Tenzin Khecheo driving around her home town talking about her place in the world and how she feels about her ethnic culture. She was born to Tibetan refugees who had fled to India. They then moved to the United States.Because of the way life went, her parents divorced and she spent a great deal of time taking care of her sisters in mom's stead, she feels that she hasn't fully connected with being Tibetan. She hopes that by trying to get into the contest she can somehow reconnect with it, and maybe perhaps help other young people.  What follows is our heroine's path back to India and into the contest. What she finds once she gets there is both good and bad and not what you expect.

Where did this film come from and why isn't there more buzz on it?This is easily one of the best documentaries I've seen in 2014. This is one of those films that I want to show to documentary filmmakers as an example of what to do when you make a film- make a film that is all about your subject and yet speaks volumes on other subject matters and speaks to a larger audience. While its possible that the filmmakers lucked into some of the larger resonances contained in their story, the people running the Miss Tibet pageant  take the time to actually educate the girls in their native culture, history, religion and politics, they were ultimately smart enough to include it all.

Over the course of the films 70 minutes not only do we get the great story of Tenzin but we get a primer on the history of Tibet, the refugee situation, an examination of beauty pageants and pondering of the question as to how much any displaced ethnic group really knows their own culture. There are a lot of things going on and the filmmakers handle them brilliantly.

I'd also like to risk a spoiler and say best of all say where it all goes and how it all ends is not what you expect-trust me.

One of the best films at this years's DOC NYC, this may also very possibly may end up on my best of the year list.

Go see this film when it plays later today and tomorrow. For tickets go here
Posted by Steve Kopian at November 16, 2014