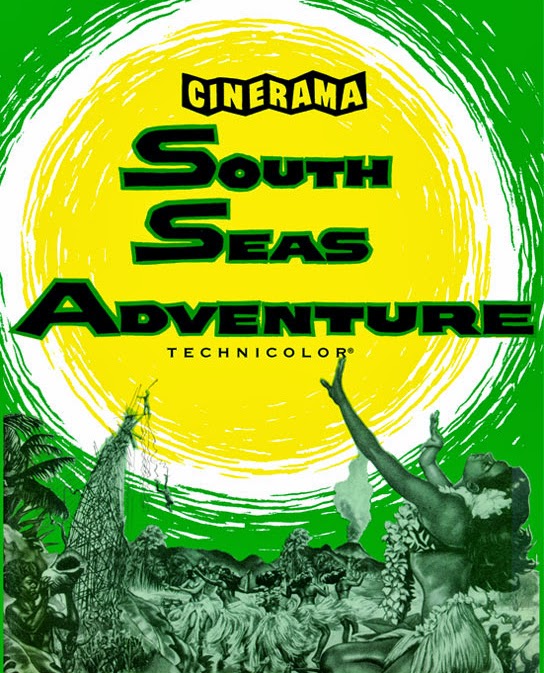 Last of the Cinerama travelogues is a trip to the South Seas. We get a trip to Hawaii, various islands, Australia and New Zealand. in a film that's full of great visuals but low on excitement.

There is nothing really wrong with South Seas Adventure, the imagery is stunning (the flying sequences are amazing), the narration by Orson Welles is suitably pithy and the  film feels like you're on vacation. The problem for me is that unlike the other Cinerama films I've seen this one is a little too laid back. There aren't too many moments of excitement. Outside of some flying sequences the only excitement in the first half is the bungee jumping that closes it out. The second half is more engaging however the two real you are there sequences the car race and the amusement park ride are much too short (though I suspect the amusement part sequence was cut short lest the audience lose their lunch)

Is it a bad film, no, its actually quite good, it's just low on the excitement scale.

I should point out that the film's DVD/Blu-ray release is amazing. Not only do you get the film with commentary (if you so desire) but you get a great half hour interview with Saul Cooper who was a publicity man for the film who talks about the film and the Cinerama process, a 20 minute making of from the period and the real jewel of the DVD a six minute Cinerama commercial for the Renault Dauphine. The Renault piece really knocked my socks of as we see how a car is put together. It made me wonder what Ron Fricke or Godfrey Reggio would have done with the process.
Posted by Steve Kopian at November 06, 2014